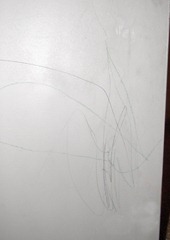 Well, it’s happened. Something I thought had the chance of occurring but I was hoping I might be able to avoid. Bug has now drawn expanded beyond simple paper and colored on the wall. It happened the other night in just a blink of an eye, but none the less it occurred, in all, it’s black ink pen and green crayon-colored glory! (I swear, back turned 15 seconds, 20 tops!)
I’ve had a hard time deciding how I wanted to handle it. Of course, initially, I rushed over to her, told her no, grabbed the crayon (pen was on the ground already) and proceeded to point to the wall where the offense had occurred, and tell her no, she doesn’t color on the wall. My initial internal reaction was to be harsher but I quickly realized it’s not her fault. Before this moment she didn’t know she shouldn’t draw on the wall. She just knows Daddy praises her when she draws and colors on paper.  So naturally, why wouldn’t she want to do it on something bigger?  Fortunately, since the other night, there have been no repeats, and she has had chances but has opted to come to sit in Daddy’s lap and help highlight his notes or write down her own opinions.
My biggest debate on this is how do I react or handle it when it happens again? Yes, I said when not if. If she’s anything like her Daddy it’ll happen again. There is still a drawing I did when I was around 3 on the inside of one of my Granny’s doors that she still talks about to this day. So what do I do? I want to be sure she knows she’s doing wrong and I want to discourage the behavior, but not to the extent that I risk taking away any enjoyment she has in drawing or coloring (self-admitted selfishness on my part here too). It’s something as a parent I knew I’d eventually face, and had yet until now. And now that I’m faced with it, I’m at a bit of a loss as to the course of action I want to take. I guess I have until next time to sit and stew on it, between now and then though, hopefully, I can keep my mini Picasso to work solely in the paper medium, and avoid drywall.

Below:  The aforementioned artwork of yours truly at a much younger and more innocent age. 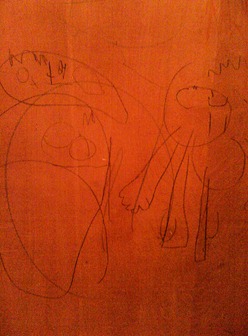 A blogger, tech enthusiast, writer, designer, pop culture pundit, a loving husband, father of 3, and undiscovered sock enthusiast. Michael has been dabbling in blogging for over a decade. After letting go of his highly successful site, he's now in the middle of his redemption story.

To Manscape or Not to Manscape?

Personal Challenge: A Month Without the Gym

Our First Venture into “Fan Art”

What am I doing wrong?

Listen to the Latest Podcast

@2021 - All Right Reserved. Designed and Developed by ParsonsMedia